I've not posted for the past two days as they've been fairly full-on marking. Usually, demos are done in person. The markers are in a Lab and the students come during their time slot and we go through the work with the student. Given the current situation, that's proved impossible.

Instead, we've been using zoom to do the marking. Zoom on Linux I've found to be a bit of a mixed bag. Firstly, when using GNOME it was fairly easy-going. I've not used zoom on Windows but I suspect it would have been a fairly similar experience. I've not tried it on Wayland with Gnome (or if I have, I've not noticed), but I suspect it'll be similar to the point below.

The problems I've had started when I tried to use Zoom in Sway. Firstly, it works reasonably well the application can launch, and can do all the basics it can in gnome. This shouldn't be too surprising as it's mostly the same technology stack (pulse audio, whatever they're using for video input (v4l?), etc...). Screen shares from other users also work OK.

However, there are three things that have been fairly annoying when trying to use it.

Firstly, Zoom's integration into calendars seems to be somewhat lacking. There are two or three important features when dealing with meetings. Firstly, I'd like to know the topic. Zoom's got us covered there, big title box. Second the date and time would be nice. There is a calendar for entering the date, it's stuck in American date format (m/d/y) which is annoying if you forget and your meeting's now in December. The time entry field is the most bazzar on sway you get a single integer for the hour and a single integer for the minute. Sometimes, they're visible most of the time they are not. There were similar issued in gnome, but it was at least usable.

I suspect if I had outlook installed locally on a Windows machine, it'd be passable, but using the office365 calendar with it is a pain. Firstly, you need to create the meeting in Zoom, to get an ID, which then generates a meeting ID. So far so Good, It also generates a calendar invite, but this isn't integrated into office365 and you can't seem to invite participants via zoom (despite the fact that it's integrated into zoom on the server-side for logins and the invite panel once the meeting has started).

Instead, what you need to do is either: copy the invite text into a meeting in the web interface, re-enter the meeting details and then invite your participants via outlook; or you can download the calendar invite locally, create an email, add the participants to the email and then attach the meeting request. Once sent you can then add it to your office365 calendar using the “add to calendar” from your sent items. It doesn't seem there is a way to add the event directly from the calendar screen (unless there is and i missed it). Either way, the other participants then get your meeting request. If you need to alter the meeting for some reason (say, for example, you forget it's bank holiday on Friday) then you need to edit it in both Zoom and Office365. When you have a large number of meetings, this can get very tedious.

For the demos the work-flow was slightly different, create the meeting. Get everything set-up (code up and running, marking sheets open, etc...) then invite the student. I did this via email, because the 'invite via zoom' feature doesn't seem to notify them if the client isn't open (or at least, that's what the students have said).

The way to do this is to open up the participants panel, click the invite button and then click on the copy to clipboard button. I'm not sure who named the button, but I suspect it's shorthand, because, “Copy to clipboard, except sometimes not the clipboard you where expecting but somehow still shows up if you paste in vim, just not in Firefox” probably was a bit wordy. I found myself pressing the button, opening up vim, pasting the contents so I could re-copy it in vim and then paste it in Firefox. Pasting into vim was also was very slow (it would take a few seconds for the text to appear). This doesn't happen with any other application, just Zoom. I have no idea why this was happening, but I really wish it wouldn't.

But, now you've scheduled your meeting, and it's meeting time.

Secondly, (and I remember this happening in a webinar in GNOME as well) when you start screen sharing or stop sometimes the pop-out windows (chat, participants, Q&A) appear and disappear at will. I suspect this might be a feature rather than a bug. If you only have one screen maybe it's useful to hide all of the zoom nonsense when screen sharing starts. Every time you start or stop screen-sharing this will happen again.

It slows down the flow somewhat if you need to stop giving your material, to find out on what intergalactic plane your student's chat window has decided to migrate itself to this time. The same thing also happened to the main window when a meeting started. For the demos, where you want to keep an eye on the marking chat (so you know if one of the other markers needs assistance or has an urgent query) this is quite disruptive. In sway this was much better. Windows seemed to disappear less often, there are a few graphical issues (half of the user's face) in the meeting window itself, but float it and it's fine (and I'm used to this happening on applications that aren't designed for tiling window managers).

I have no idea of the steps involved in making it happen, but sometimes zoom would open up into a single window mode where the chat, participants, etc.. were on the side, rather than creating lots of small windows. This was much nicer especially when floating, Zoom, can I have that as default? :D

This last one isn't Zoom's fault. Screen sharing doesn't work in sway. I'm not surprised, it's Wayland based wlroots has it's own screen sharing API and I wouldn't expect they had considered it for for the 4 or so Sway users. I have ways of working around this one mostly. What would be quite nice is if I could RTMP-stream to a webinar rather than having to use Zoom's share desktop feature.

When using Sway, I cannot give a lecture. I can't show code on my screen or go through an exam paper if I can't show the exam paper or code editor! My work around, or at least my first work-around before the lockdown proper, was to use OBS and the plugin I mentioned in my last post. The lecture then became a youtube livestream. After the lockdown proper, when I was giving my lectures from home, I used gnome shell and put off reinstalling my OS until after my last revision lecture (and Fedora 32 was out). By happy co-incidence that happened to be the same week.

Ok, this post was quite negative, lets end on a good note.

Overall, I'm actually happy they provide a Linux client at all. It's a bit rough around the edges, and of course I'd prefer something a little more polished, but it's better than nothing. All the basics work quite well and I've not found anything insurmountable. Of course, I'd prefer it was FOSS, but it's the 'standard' that's been settled on for the time being. The sway-specific issues are somewhat self-inflicted, I use sway because it makes my life easier, but I don't expect them to support it. So, thanks for letting me (mostly) get work done from home Zoom, just hope I don't actually need to still be doing this in real December.

Today has been a fairly lazy day. So not much to blog about, and not much comes to mind to write about.

I've spent a little time with vscodium and Flatpak today. I'm working on porting one of my Java projects to C++.

Trying to get VSCodium to stop yelling about includes was providing difficult. I do like using Meson. When the code is more than a single class I'll put it on gitlab :).

Oh, and the bug I reported yesterday got fixed \o/ 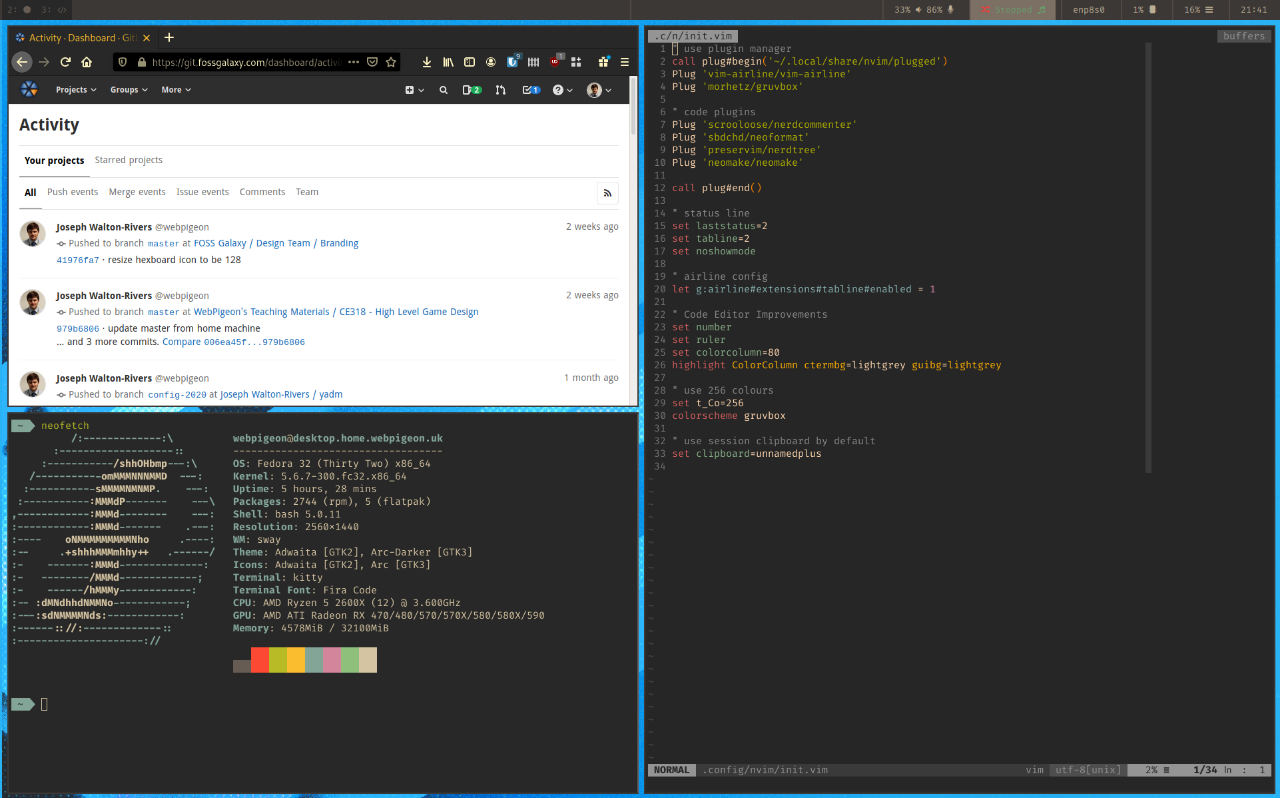 Today was the last of the three revision lectures that I was giving before the exams start.

The revision lectures are usually in the lecture halls, but with everything that's going on we are doing them from home. It's a bit of a mixed bag. Important that we stay inside, however, I miss being on campus.

It's not quite the same being in a room by yourself, speaking into the void as it is speaking to a room full of students. There isn't anywhere near the same level of visual feedback during the lecture.

I also miss being able to walk around the labs and see all the awesome stuff students are working on. Hopefully, we can all come back next term.

Blogging on the fediverse, an interesting idea and a possibly simplified way of doing this.

It's been a while since I regularly blogged, and if I'm being honest it wasn't all that regular. I've been looking at the 100 days of blog post idea that's been on the fediverse the past few days and thought I'd jump in with both feet – not as if there is a lot else to really do at the moment (besides work that is :)).